The Citadel of Yapahuwa Sri Lanka (originally called “Yapawwa”), was the capital of the country for a brief period from year 1273 to 1284. Located midway between Anuradhapura and Kurunegala; the Yapahuwa Complex comprised of a Rock Fortress, Royal Palace and Buddhist Temple. Prior to King Bhuvenakabahu  moving out of Polonnaruwa in 1272, Yapahuwa served as a military outpost for General Subhapabbota (Subha) around 1215 AD. 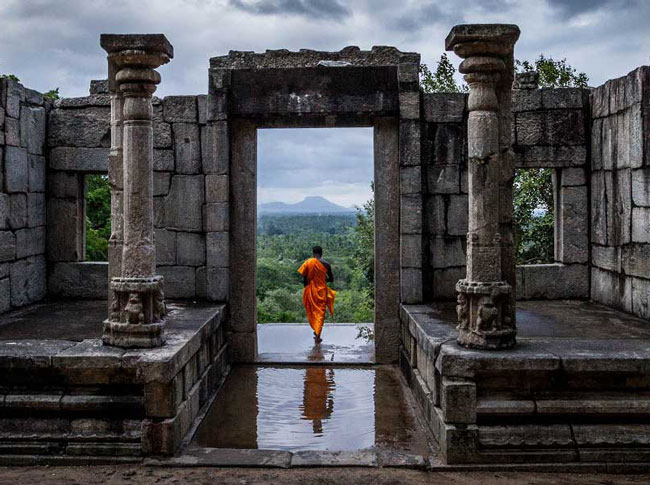 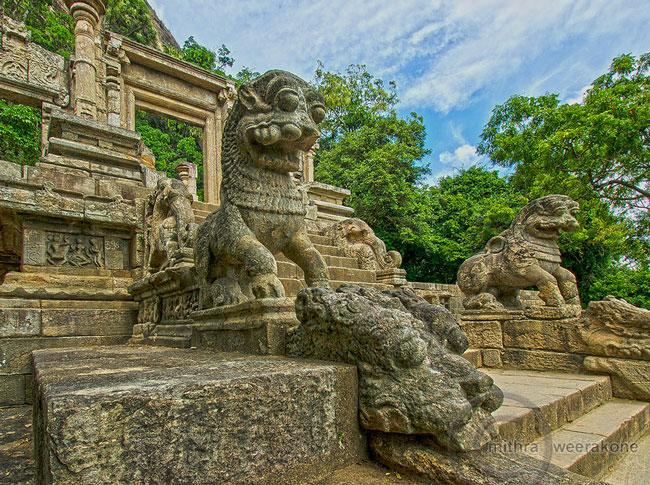 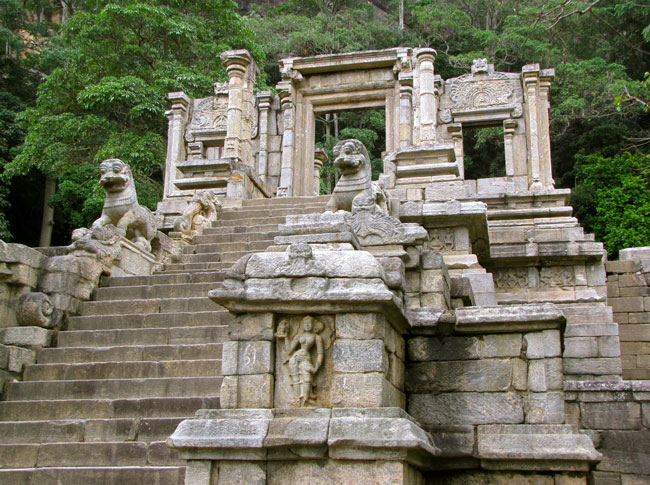 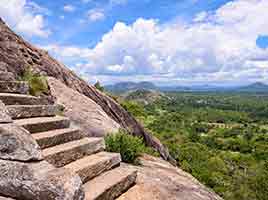 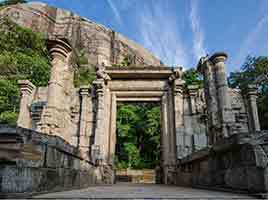 Fortress, Palace and Temple of the Tooth

Built in the style of the Sigiriya Rock Fortress, but on a smaller scale, Yapahuwa was set on a granite rock that abruptly rose almost a hundred metres above the surrounding low-lying areas. However, while the Sigiriya Rock Fortress is perched on the summit, the Yapahuwa Fortress is constructed at a lower level. Two ramparts forming a rough semi-circle and a moat were part of the exterior fortifications. The inner fortifications included a high stone wall circled by a moat. It is believed that the homes of the King’s subjects were located in between the inner and outer walls, while the King’s palace, the Temple of the Tooth and other administrative buildings were located within the inner wall. Evidence of these fortifications are still visible.

The biggest showpiece of the Yapahuwa complex is its ornate stairway which climbs steeply up to the palace. Of the three flights that existed when it was in use, the bottom one has been replaced by cement steps. The top flight, however is an amazing exhibition of the talented craftsmanship that existed then. There are statues of dwarfs, Elephants, Makara Toranas (Dragon Arches), a pair of goggle-eyed stone Lions and goddesses. Even the doors and windows have been intricately carved. Panels that surround the windows are carved with musicians and dancers, and one of the musicians is shown playing a Kandyan drum. This, in fact, is the oldest record in art form of this famous Sri Lankan musical instrument.

At the top of the stairs, one can view the impressively constructed doorway that once led into the Temple of the Tooth. Not much remains of it at present, and one must be satisfied with enjoying the breathtaking vista of the surrounding flat plains from the palace.

The Yapahuwa Museum is a place one must visit and it is located to the right of the premises. A fine stone window from the top of the stairs is one of the most important exhibits complete with its intricate and fine lattice work which reflects a somewhat Arabian style.

Restored in 1886 and standing behind the Yapahuwa Museum is a cave Temple containing some fascinating works of art and even some Brahmi inscriptions. Among others one can view wooden Buddha images and a single bronze image, and it is interesting to note that some of the other pieces of art are similar to those found in India’s ancient Buddhist sites such as Ajanta and Alchi.

Evidence suggests that King Buwanekabahu’s kingdom had strong links with China on a diplomatic level. Several items of Chinese ceramics have been uncovered during early excavations and experts have determined that they are some of the finest such examples to be discovered in this country. Furthermore over 1,000 Chinese coins and numerous pieces of Celadon pottery have also been unearthed.

Yapahuwa initially served as a military outpost for Senapathi (General) Subhapabbota (Subha). In 1215 AD the Sinhala kingdom was in political decay. The South Indian King Kalinga Magha (reign 1215 – 1236) sensing an opportunity, led an invasion of Sri Lanka with nearly 24,000 solders. From Yapahuwa, Subha was able to check Magha’s (Magha the Tyrant) forces from proceeding southwards.

In later years, further Dravidian invasions from South India drove King Buwanekabahu I from Polonnaruwa to take refuge in the rock city of Yapahuwa – taking with him the Sacred Tooth Relic in 1272. Thus Yapahuwa became the capital of Sri Lanka and remained so until King Buwanekabahu’s death in 1284.

Following the death of King Buwanekabahu I, there was another invasion of the island by the Pandyans of South India. During this foray they were able to capture the Sacred Tooth Relic which was kept in Yapahuwa. At this point Yapahuwa Rock Fortress was abandoned. From then onward it was inhabited by religious ascetics and Buddhist monks.

The Yapahuwa Rock Fortress is located in the Pahala-Visi-Deka-Korale, Wanni Hatpattu in the North Western Province. It also provides travellers with another option in terms of transport as the Maho Railway Station is just about 4km away. A bus service to Yapahuwa is available from the Station, but for the more adventurous, the breathtakingly picturesque countryside provides an eventful hike.

Our Tourslanka packages to the historical sites of Sri Lanka will take you to the Yapahuwa Rock Citadel, constantly providing useful information that will make every element of your visit more meaningful. Let us design a package for you – filled with leisure, culture and lots more.