Nalanda Gedige (Sinhala: නාලන්දා ගෙඩිගේ; Tamil: நாலந்த கெடிகே) is a fascinating archealogical site located a kilometre east of the A9 route (between Kandy & Dambulla) around 20km north of Aluvihara Temple. When siteseeing in the area, it is included in the Cultural Triangle ticket and is worth a visit for several reasons, one being the composite style of its architecture which exhibits a unique and extraordinary and quite unexpected fusion of Buddhism and Hinduism. 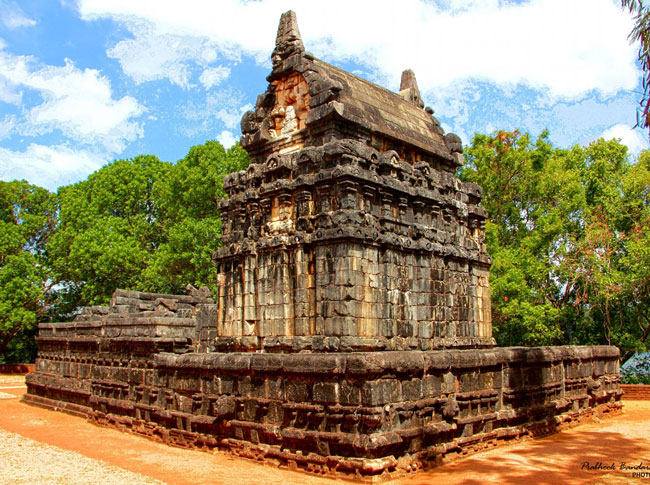 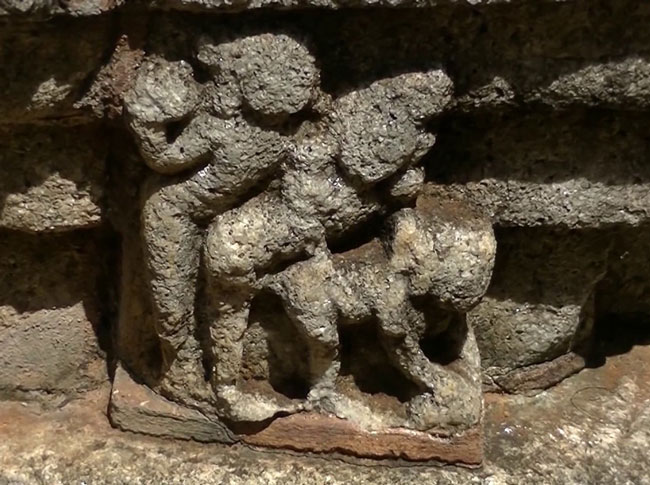 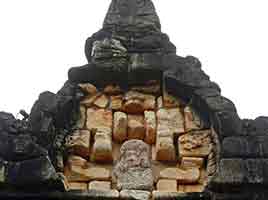 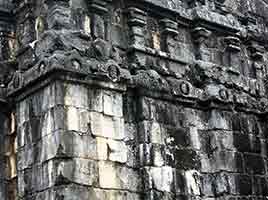 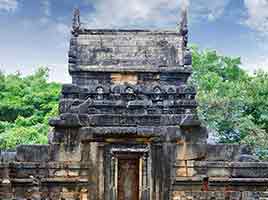 How, When and Why

The lack of specific answers to these questions is, in part, responsible for the allure of the edifice that is Nalanda Gedige. Deriving its name from the great Buddhist University of Nalanda in India, this shrine or Gedige is thought to have been constructed sometime between the 7th and 11th Centuries A. D. This period in Sri Lanka’s history was full of turmoil – the Sinhalese monarchy was on the decline and South Indian kings were making their presence felt here. Therefore there is some speculation that the Nalanda Gedige was a bold step in trying to create a fusion of Sinhalese and Tamil cultures through its hybrid style of architecture that includes Tantric Buddhist carvings and Hindu elements.

The known history of the Nalanda Gedige commenced in 1893 when according to reports by the then Archaeological Commissioner, H. C. P. Bell, the land around this granite construction was acquired. In the year 1911 part of the labour force working at Sigiriya were dispatched to clear the jungle areas around Nalanda in order to restore and preserve the structure, while searching for still-buried parts that might be discovered. A great deal of importance was given to this exercise since this is the sole example of composite architectural styles blending together to form an impressive edifice of this nature.

In 1912 Bell put forward a report with proposed plans for the restoration and even relocation of the Gedige. However it was not until the 1980s that any major steps were taken in this regard. By then, water from the newly constructed Bowatenne Tank was threatening to inundate the shrine. The opportunity was seized and the structure was dismantled brick by brick, stone by stone, and reconstructed in a new location beside the tank, approached via a flower-edged causeway with a stunning panorama of tree-covered hills in the background.

Normally the term ‘gedige’ is used to describe structures made completely of brick. However the Nalanda Gedige is unique when compared to others of similar style found elsewhere in Sri Lanka mainly since the entire edifice has been constructed of crystalline limestone.

Nalanda Gedige stands out as a fascinating site due in large part to its interesting mix of Buddhist and Hindu architecture. The shrine’s ground plan leans towards the traditional Buddhist designs, but

the ‘Mandapam’ or Waiting Hall shows a distinctly Hindu style as do the door jambs, and then the crocodile balustrade, moonstone and dwarf figures are once again influenced by Buddhism along with the Tantric Buddhist carvings which exhibit an erotic form of art, made famous by the carvings at Khajuraho in India. Even though the shrine has no known history, archaeologists would have been provided with a possible clue as to its original construction period by the façade sections which are richly decorated in keeping with the 7th Century Pallava style which was popular in Mahabalipuram, South India. Interestingly, it is the only Buddhist monument in the island to have been influenced by this architectural style. However, an image that is truly indigenous also occupies a prominent place at Nalanda, that is the squat figure of Kuvera (the deity of wealth) seated on a Lotus plinth in a semi-circular niche of the southern section. It is possible that the same sculpture adorned the northern section as well although nothing remains now. Though the exterior of the structure is crowded with sculptures of both styles, it is not an overwhelming or unpleasant sight. On the contrary it presents an altogether cohesive spectacle.

An expert in the field of Archaeology has pointed out yet another feature of this shrine. He says that in addition to the blend of Hindu and Buddhist styles, a definite synthesis between the Mahayana and Theravada forms of worship can be seen in its architecture and art forms.

Sadly the sculptures found at Nalanda are in an extremely deteriorated state and are almost unrecognisable. Among them are some Buddha torsos, a Bodhisatva image and a figure of Ganesh. One of the Buddha images has since been fully restored, enabling devotees to pay homage at the shrine.

A small ‘Stupa’ is the only other building found on this site, and it is apparent that this had been broken into at some point of time by treasure hunters.

Visit this site of infinite questions.

Our Tourslanka package will take you to this place of beauty which, to this day retains many a secret, adding a new and unexpected dimension to your tour of this island.