The Embekka Devalaya (Embekke or Embekka) Temple is situated in an area known as Udunuwara in the Kandy district. It was built during the Gampola Era (AD1357 – 1374) by King Vikramabahu lll, as a place of worship dedicated to Mahasen, also known as “Katharagama Deviyo”. It is also where local deity Devatha Bandara is worshipped by devotees. 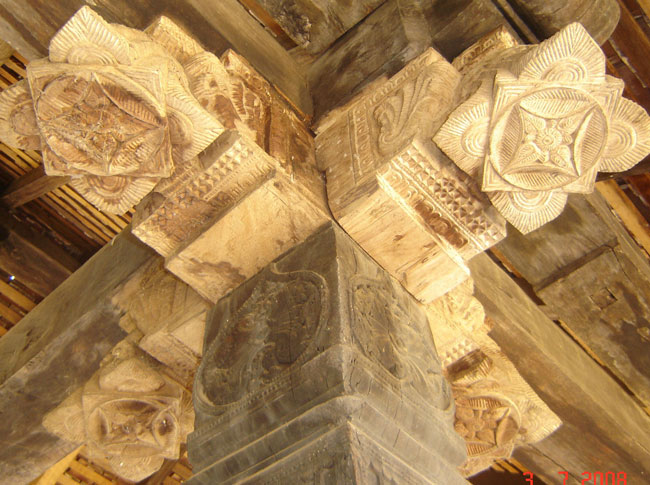 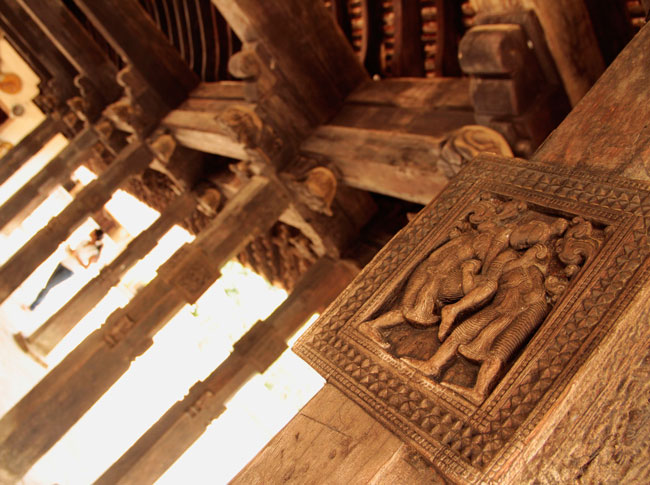 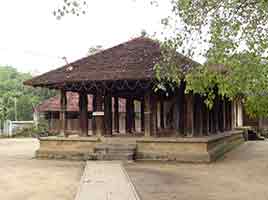 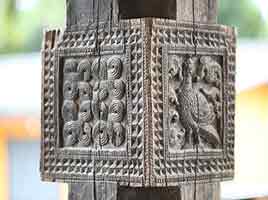 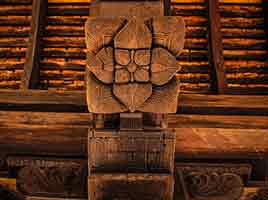 How to get there

The Embekka Devalaya, situated in the Medapatha Korale of Udunuwara, is within easy access via the Colombo – Kandy main road, turning off at Pilimathalawa. From then it is a mere 7 -8km to reach the Devalaya. Two more famous Temples – Lankathilaka and Gadaladeniya can be seen along the way. Ruins of the ancient Embekka Ambalama (Rest) are also visible just before the actual Temple is sighted.

The picturesque Peradeniya Botanical Gardens are just about 3kms away from the Temple.

It has been said that the Embekka Devalaya may be the best place in the world, certainly in Sri Lanka to see the finest wood carvings of old. The main Temple or Maha Devalaya itself has two sections, the “Wedasitina Maligaya” (in which the Deity resides), and another which has the “Digge” (Dancing Hall) and the “Hevisi Mandapaya” (Drummers Hall). The Wedasitina Maligaya is where the wooden image of the Deity has been placed.

The main hall provides a feast for the eyes with its columns, pillars and doors all adorned with breathtaking wood carvings. The roof too has its own special design done in wood. A unique feature is that everything consists entirely of wood, with no other materials being used, not even metal. Even the nails used have been hewn out of wood.

One of the most unique carvings features an entwined elephant and bull. Covering the bull carving with one’s hand reveals the whole elephant, and covering the elephant likewise reveals the bull in an amazing example of artistic expertise. It is believed that these beautiful creations are the work of a team of skilled craftsmen led by master craftsman Delmada Mulacari under the royal patronage of King Wickramabahu lll.

A must-see feature at Embekka is the ‘Madol Kurupuwa’, a large wooden pin which holds twenty six rafters together at one end of the Digge (Dancing Hall) roof, making it a one of the most remarkable examples of medieval carpentry in this country.

A compartment called the Antaralaya houses an array of items with great historical significance. One of these is a pair of tusks offered by King Wickramabahu, another is the Kunama (palanquin) given to King Rajasinghe ll by the Dutch, which he thereafter donated to the Temple. A large number of other valuable items can be seen on display within the Antaralaya. Outside there is a large Bo tree in addition to several Buddhist and Hindu shrines, providing sufficient evidence to conclude that devotees of both faiths had co-existed in perfect harmony during that period.

The Ambalama, as shown in old photographs is believed to have been 27feet long and 22 feet wide. It was built on a platform with 7foot high monolithic columns at each corner. Also known as the Sinhasana Mandapaya, it was used by the King and his royal entourage as a resting place and also as an observation point when the annual Perahera took place. Sadly the building has suffered due to the ravages of time and only a few of the pillars exist, and the stone carvings on these are fading fast with continuous exposure to the elements.

The Sandunkudama, another important section of the Devalaya is where the sacred items taken in the annual Perahera are stored.

A piece of History

A very interesting tale lies behind the Embekka Devalaya which begins with a drummer who was suffering from an incurable skin disease. After visiting the famous Kataragama Devalaya in the south of the island, he had been cured. In gratitude he had promised the Deity Kataragama that he would visit the Temple annually to pay his respects. Advancing age made it hard for him to keep his pledge, but he was given a reprieve by the deity who instructed him to conduct rituals of worship in a place where miracles were taking place. It so happened that Queen Henakanda Biso Bandara had a beautiful flower garden in which there stood a tree from which blood would issue every time someone tried to cut it down. This was the place of miracles chosen by the drummer to build a Temple to Deity Kataragama. It was later developed into a larger complex by King Wickramabahu and is visited by thousands of devotees each year.

A tour of the hill capital Kandy would not be complete without a visit to the famous Embekke Temple, with a well informed guide to take you through this memorable experience. It is certain to be one of the highlights of your hill capital excursion with Tourslanka.