The Degaldoruwa Raja Maha Viharaya is situated in a village called Amunugama close to the city of Kandy. It is famous for the magnificent paintings that adorn its walls and one can be forgiven for losing track of time amidst these colourful examples of ancient Kandyan art. The cave itself was said to have been hollowed out of a rock which rose to a height of around 40 feet, and shelters the Shrine Room and an entrance area. The details pertaining to the construction of this Temple are found on the Degaldoruwa Tamba Sannasa (Copper Plate).

Anyone travelling through Kandy can reach the Degaldoruwa Viharaya via the road over the Lewella Bridge or by turning off at Nattarampota along the Kundasale Road. 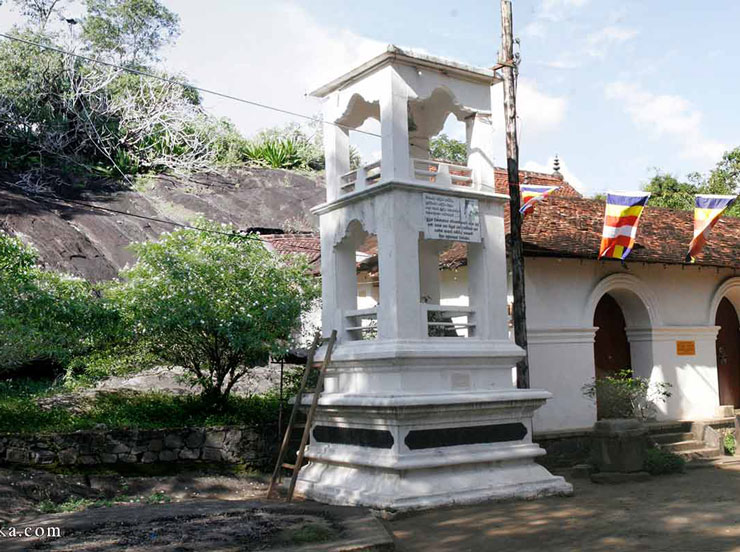 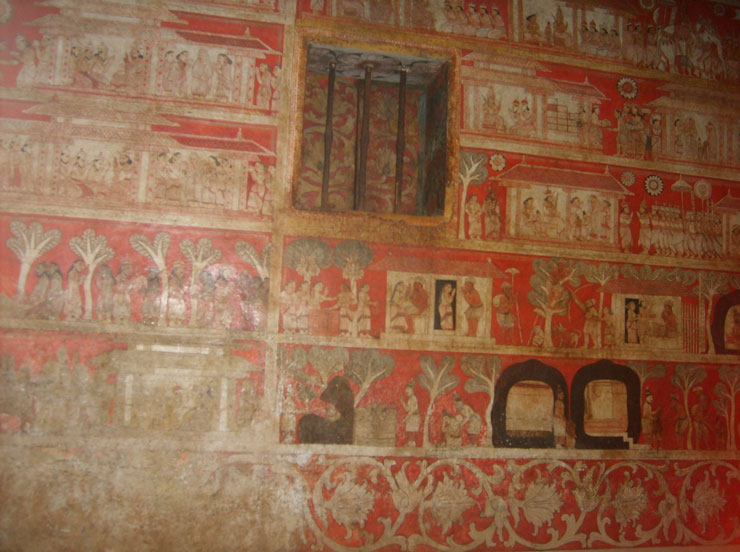 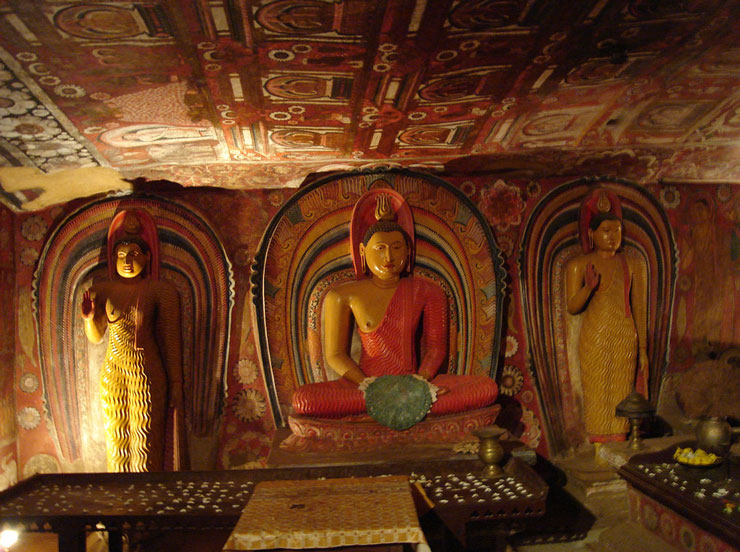 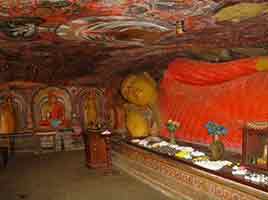 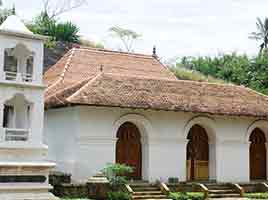 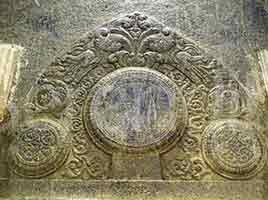 Construction of the Temple

The initial steps for the construction of this Temple were taken by King Kirthi Sri Rajasinghe (1747 – 1780) who was a great patron of the arts. It has been said that some of the finest Kandyan Temple paintings were done during his reign. However he died before Degaldoruwa was completed and it was left to his younger brother King Rajadhi Rajasinghe to see it through. After completion King Rajadhi Rajasinghe placed the Temple in the custody of a very learned monk, Moratota Dhammarakkita Nayaka Thera, who was also his teacher.

The Degaldoruwa paintings are renowned for their beauty and are also indicative of the customs and social conditions that prevailed during that era, even the clothes worn by the people of that time and the homes they lived in are vividly portrayed. In fact, the paintings show a very distinctive difference between the garments worn by those in low-country and up-country regions. These works of art were been created by team of ‘Sittara’ painters headed by Devendra Mulachari, while Devaragampola Silvatenne Unnanse was the most well- known painter in the group, having done similar paintings in other Temples during his lifetime.

The Degaldoruwa Viharaya paintings are unique due to the fact that the elements – humans, trees and animals are generally of a uniform size.

Furthermore, it is only the front view of the human form that is always shown, never the rear. Interestingly the trees are depicted in a stylized form with the leaves and branches spreading out to the sides. One can also identify the streams depicted in the paintings from the fish that are shown swimming in them. There is a great deal of detail to be seen in the paintings such as the uniforms of the attendants which clearly display the royal insignia, while the elephants are splendidly embellished and adorned. Red and green are the colours that are predominant in these paintings at Degaldoruwa and it is interesting to note that all the colours were made from the bark of trees found in the nearby village.

The ‘Budu-ge’ or Image House

The ‘Budu-ge’ or Image House tells a complete tale – actually four ‘Jataka’ stories or folk tales. The images of each story form a continuous pattern along the walls, so that when one walks from one end of the room to the other, the story unfolds in a clear progression. The four stories depicted are the famous Vessantara Jataka, Sattubhatta Jataka, Satusoma Jataka and the Mahaseelava Jataka which all portray stories of the Bodhisatva.

The ‘Mara Yudde’ (the Buddha’s battle with Mara) also occupies a prominent place amongst all the paintings in the Degaldoruwa Viharaya. The Mara is depicted as having five faces with the Mara forces wielding guns. However, on a more pleasant note, a painting of the ‘Mahi Kantawa’ adorns the ceiling of the Shrine.

Visiting the Degaldoruwa Raja Maha Viharaya on your Tourslanka holiday will take you to a wondrous cavern filled with ancient Buddhist art that still possesses the power to captivate and enthrall. Furthermore our experienced guides will make the stopover all the more significant with the wealth of information they freely impart