Buduruwagala – The Rock of Sculptures

Buduruwagala is a historic Buddhist Rock Temple located on the Tanamalwila Road, about 5km from Wellawaya. The road takes you past a dammed lake to this serene site which sits in a plot of dry-zone forest inhabited by beautiful butterflies and birds. The meaning of the name Buduruwagala is “rock of Buddhist sculptures” and archaeologists have determined that these works of art are of the 9th or 10thCentury AD. 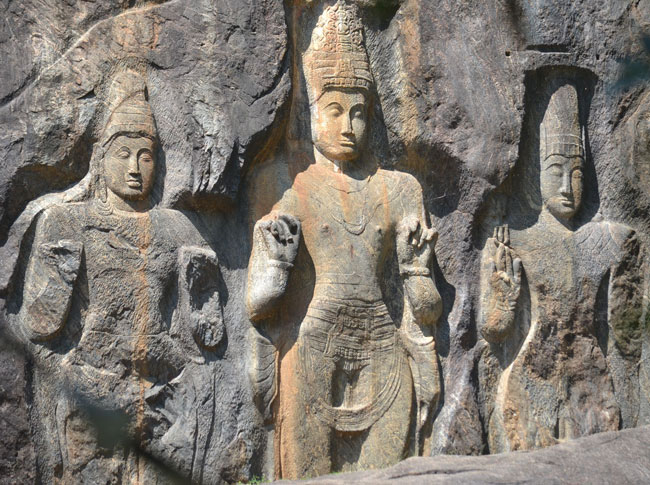 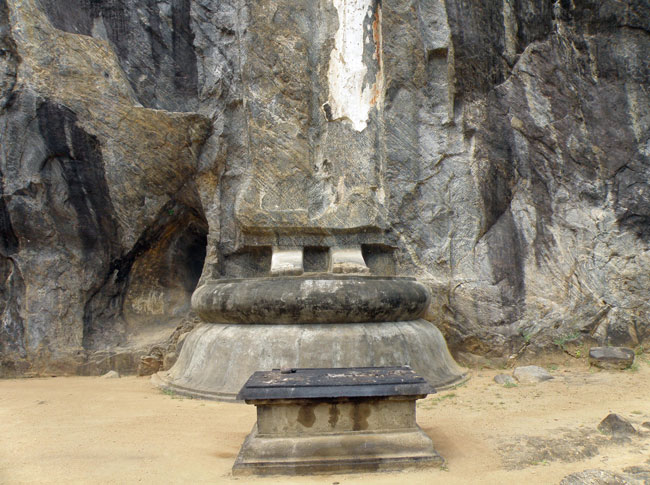 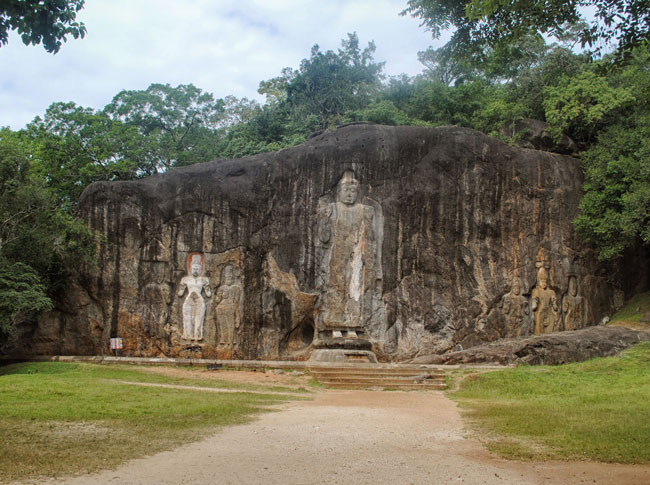 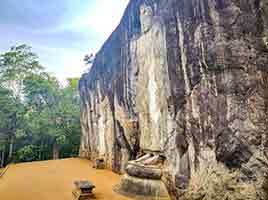 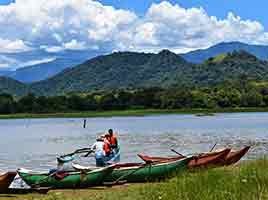 Even though experts have been able to determine the period during which the images at Buduruwagala were created, very little background information has ever been found. Even the name by which it was originally known has not come to light. However it is believed to have been a hermitage for monks of the Mahayana sect, which is probably why there are many Bodhisattva images of this tradition.

Buduruwagala means “rock of Buddhist sculptures” and is aptly named as there are seven figures carved on the rock. The largest of these is a Buddha statue standing at an impressive 51 feet in a stance known as the “Abhaya Mudra”. The rock on which these images have been carved has an interesting shape – almost like a kneeling Elephant with its head bent towards the earth and is about 300 feet wide and 7 feet high.

The figures, cleverly carved in high relief show two bodhisattva images, each flanked by two attendants. These two groups are positioned on either side of the main central Buddha statue. This figure, which is the tallest of the seven, still bears traces of what are believed to be the original paints of red and yellow. Unfortunately, however, this statue remains in a somewhat unfinished state and the sculptor has not carved very deep into the rock, giving this one and all the other images a rather flat appearance. Near the right foot of this image one notices a hole shaped like the flame of an oil lamp. This is quite a miraculous phenomenon because the inner recesses of it are always found to be wet with a substance that smells like Mustard oil. A plausible reason for this is yet to be discovered. Several square-cut holes in the rock above this image suggest that a canopy may have existed in the early days.

To the left, one can see a carving of a figure that is believed to be a Mahayana deity, Alokiteshvara. To his left is an attendant, while the other image in the group is said to be Tara, consort of Alokiteshvara.

The group of three figures on the right side consists of Vajrapani (the Tibetan Bodhisatva), Maitreya or Natha (the future Buddha) and Vishnu. Vajrapani holds in his hand an hourglass-shaped thunderbolt symbol of Tibetan origin called a Dorje, and this is considered one of the rare examples of Tantric influence in local Buddhist art.

Just about 6km south of the Buduruwagala rock is a detour which leads you to the Handapangala Reservoir. This is a spot which attracts herds of wild Elephants during certain times of the year, mainly the summer months. Visitors can watch these Elephants from across the river or enjoy a boat ride with a local guide and see them at closer range.

This rock which boasts of, not only remarkable sculptures, but also miraculous occurrences is a not-to-be-missed element of your Tourslanka itinerary. Come with us and let us steer you towards this tranquil setting for an interlude that will prove awe-inspiring and memorable.