The Buddha statue at Avukana (Sinhala: අවුකන බුද්ධ ප්‍රතිමාව) also known as Avukana Pilimaya, is a  remarkable rock carving of a standing Buddha. Located about 175 kms away from Colombo in Avukana, near Kekirawa in the North Central Province of Sri Lanka, this statue is a masterpiece of man’s artistry and creative skill. Avukana was built during the reign of King Dhatusena in the 5th Century. Standing over 40 feet high, Avukana is the tallest of the ancient Buddha statues in the country. 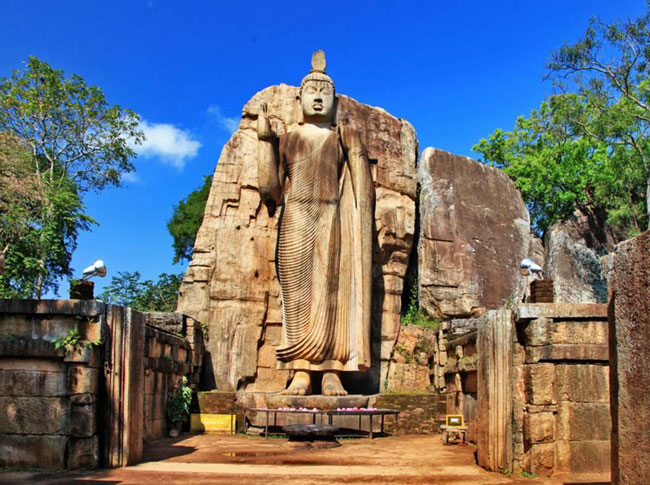 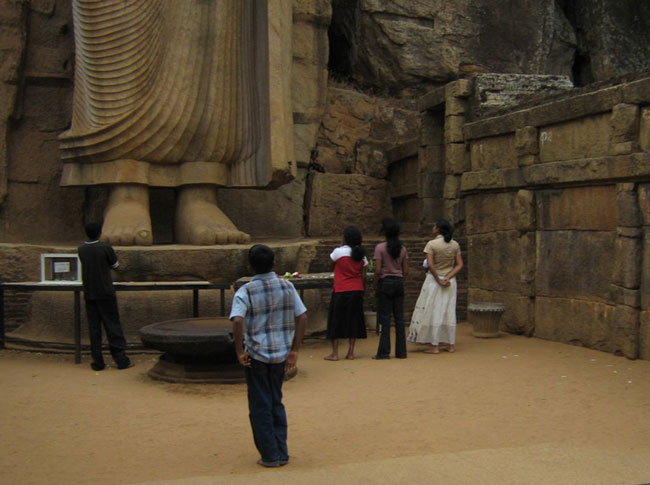 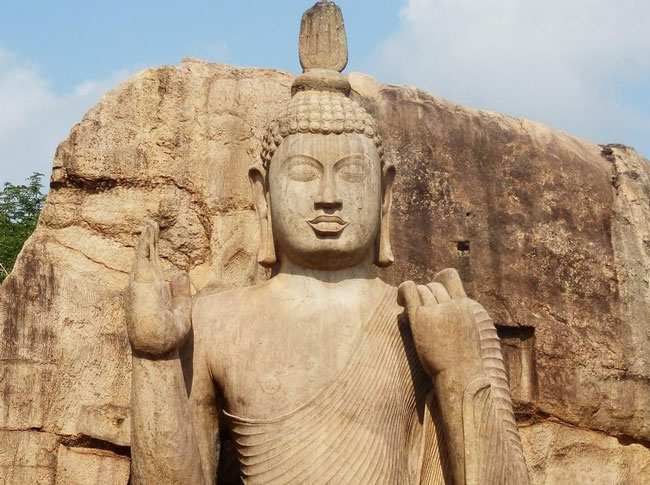 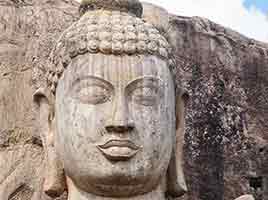 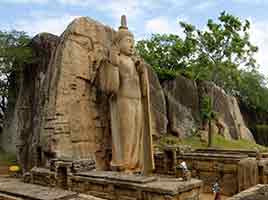 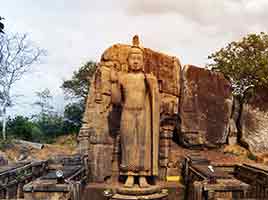 The statue stands in a village named Avukana, close to the Kala Wewa reservoir in AnuradhapuraDistrict. The Avukana statue rises out of a rock cliff face like a monolith. A unique feature is that the statue has been carved out of a great granite rock face and appears to stand alone, but is in fact connected by a narrow strip of rock which also supports the statue. The Buddha image stands on a Lotus flower pedestal which has been carved separately and placed under the statue. The height of the statue by itself is 38 feet and 10 inches. With the pedestal included the height in total is an imposing 42 feet (13m).

The Buddha statue is located within an Image House, a place of worship in Buddhist tradition, which is now mostly in ruin and only a few crumbling brick walls remain to indicate its original spread and location. The Image House was 74 feet (23m) long and 63 feet (19m) wide – an impressive edifice indeed.

The Avukana Buddha stands upright and depicts a variation of the Abhaya mudra. The sculpture displays influence from both the Gandhara and Amaravati schools of art in India. The face of the statue is impassive and looks straight ahead, while the left hand clutches the falls of his robe, at the left shoulder.  The right hand is raised to a point near the shoulder with the palm facing left in a position known as the ‘Asisi Mudra’ –  which is a pose of blessing. The robe has been draped tight, clearly defining the contour of the body. You’ll be amazed at the delicacy with which the pleats of the robe are carved on this statue, with each pleat falling down in natural waves.

The degree of accuracy of the statue’s construction is truly remarkable. According to local beliefs, a drop of rain water sliding off the nose would drop directly downwards into the small depression carved into the space between its big toes. (This occurrence would naturally depend on the absence of any blowing that would change the direction of the falling drops of water).

The statue stands on a pedestal that has been carved from a separate piece of granite, believed to have been added on later. The lotus shaped pedestal depicts a double-petal lotus flower and called the “padmasana”.

Archaeologists made an interesting discovery of five bronze statues placed in a cavity around 6 feet below the feet of the statue. The statues depicted Indra, Brahma, Kuvera, Varuna and Yama. Inscriptions found in caves around the area where the statue is found record the period in which the statue was made and also the fact that a monastery existed there.

The Origins of Avukana Statue

While the artist of this magnificent work of art is not known, there is a generally accepted belief that this statue was the result of a competition between a Master Sculptor (guru) and his pupil (gola).

That the competition had royal blessing is clear, and this legend is supported by the fact that in nearby Sasseruwa stands a similar standing Buddha statue, which has not been completed. The story goes that King Dhatusena was to reward whichever sculptor completed his work first, and the master sculptor having completed his work first and been rewarded for it, his upstart pupil gave up on his carving and abandoned the project.

Avukana literally means “eating the sun” in Sinhala – a reference to the dawn. The best time to view the statue is when the first rays of sunlight touch upon the head of this magnificent work of art. Tourslanka conducts private tours to Avukana Buddha statue. Contact us to organize a trip to witness this ancient masterpiece and gain some valuable local insight.