Lankatilaka – The temple built on a rock

Home1 > Excursion2 > Lankatilaka – The temple built on a rock

The Lankatilaka Raja Maha Vihara (also known as the Lankatilaka Temple or the Blue Temple), is located in Hiyarapitiya in the Udunuwara area of Kandy, Sri Lanka’s hill capital. It was constructed as a four storey building that stood eighty feet high and sits on an uneven rock bed overlooking the Hantane mountain range. The history of Lankatilaka Vihara dates back to the Gampola era and was constructed during that time under the patronage of King Buwanekabahu IV in 1344 AD. 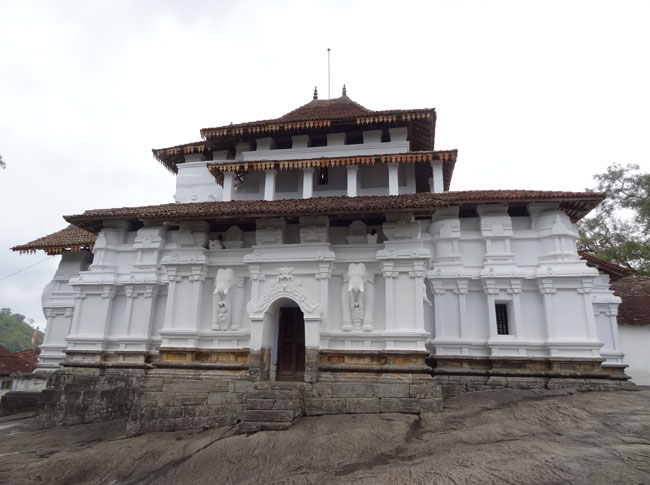 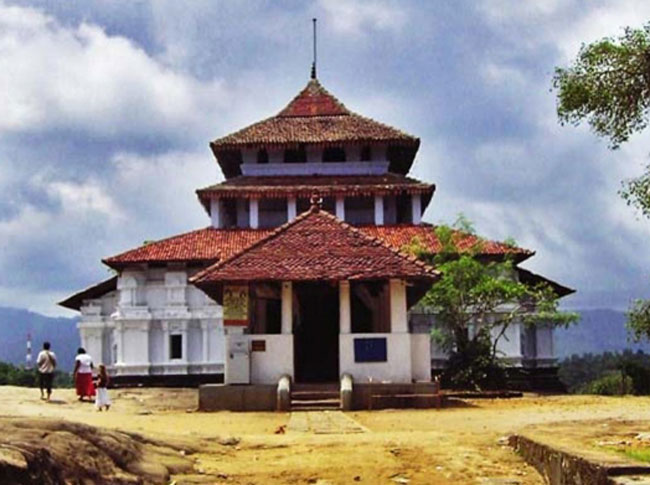 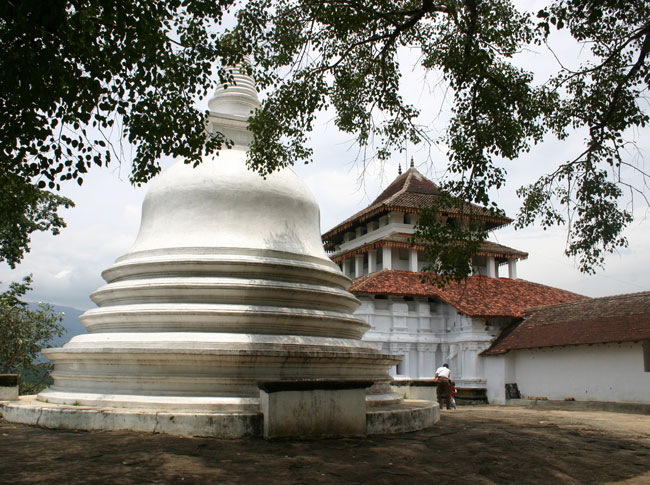 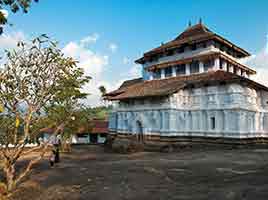 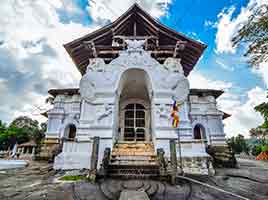 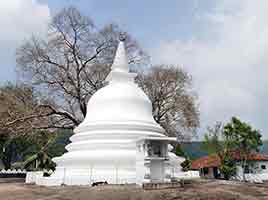 This is one of the three famous Temples that are located near Peradeniya, and can be reached by travelling along the main Colombo – Kandy road and turning off at Pilimatalawa. A short distance of around 4km is all it takes to reach Lankatilaka, which stands tall at the crest of the Panhalgala Rock.

Lankatilaka is a most unique structure in itself, having been built entirely atop an uneven rock surface and rising upto a height of eighty feet. Based on inscriptions to be found on the Temple’s copper plaque, one learns that the foundation of granite was laid on the rock surface and the rest of the structure was made of bricks. Beautiful arches and sculptures enhance the thick outer walls, making this an architectural marvel of that era. There are many inscriptions in both Sinhala and Tamil languages cut into the solid rock which describe the facilities provided to the Temple and the land gifted by Kings who ruled then.

According to historical reports King Buwanekabahu IV entrusted the construction of this Temple to his Chief Minister Senalankadhikara. South Indian architect Sthapati Rayar was responsible for the design which blends Sinhalese architecture of the Polonnaruwa period with Dravidian and Indo Chinese styles. The Temple building took the shape of a cross with the four sides protruding outward. Although it was originally four storeys high, all that remains today are the ground floor and part of the first floor.

Lankatilaka was dedicated to the worship of Lord Buddha as well as several deities including Deitys Vishnu, Saman, Vibhishana, Ganapathi, Skandhakumara and Kumara Bandara (to whom the Temple was entrusted). It can be seen that the people of that era who resided in the Gampola and Kandyan kingdoms not only had a strong belief in the worship of deities, but were also devoted followers of the Buddha and His teachings.

The Lankatilaka Raja Maha Vihara can be approached from two directions. One entrance is through the Sanghawasa, located at the bottom of the rock from where the steps leading to the Vihara begin. One can see large rice storage bins known as ‘Atuwa’ within the premises. A breathtaking view of the surrounding landscape can be enjoyed while ascending the stone stairway.

The Vihara complex comprises of the Temple building, the Dagoba (Chaithya) and the Bo tree. A large image of Lord Budhha’s footprint carved of stone and known as the Buddha Siripatula can be seen near the Bodhigharaya. The preaching hall stands in front of the main Temple entrance and a remarkable feature is that its roof is thatched with flat tiles while round tiles cover the central part of the roof creating beautiful patterns.

The main Temple or Buddha Image House is built of granite covered with plaster and extends three storeys high. Stunning examples of architectural design and wall paintings adorn the walls and ceiling inside this building providing a scene of rich colour and skillful craftsmanship. A Moonstone or ‘Sandakadapahana’ lies at the entrance flanked by two Korawakgalas (balustrades) bearing the Gajasinha design. Enter through the arched doorway and the eye is drawn towards the two paintings of lion figures which have become one of the most recognisable and unique features of Lankatilaka Vihara. A statue of the Seated Buddha sheltered by a Dragon Arch or ‘Makara Torana’ takes pride of place within the Image House’s interior. Surrounding the statue are designs of trees and flowers which promote the ‘Bodhi’ concept, and the walls are adorned by paintings from ‘Suvisi Vivarana’ (the lives of the twenty four previous Buddhas).

Visit the Temple on the Rock

Your Tourslanka excursion of the hill country will no doubt be made all the more meaningful by a visit to the Lankatilaka Raja Maha Vihara. A true example of medieval architectural expertise, it stands still and beautiful to enthrall every individual who passes within its precinct.